Smartphone and tablet-based mobile point-of sale (POS) terminals will handle 20 percent of all retail transaction value by 2021, up from an expected 4 percent in 2016, a new study from Juniper Research showed.

The research firm forecasts that the use of mPOS systems will account for more than 1 in 3 POS terminals by 2021, driven by larger retailers adopting mPOS as part of an array of point-of-sale options.

“We are seeing several vendors tailor their software to the needs of specific industries, integrating mPOS capabilities as part of broader cloud-based business software,” commented research author James Moar. “These additional services can then make use of the sales data directly to manage inventory, monitor staff performance and other functions, which can all add more value to a business and justify a higher margin.”

The research has also found that mPOS is  enabling smaller merchants in emerging markets, particularly across India, Southeast Asia and Latin America, to accept card payments and grow their businesses. Much of the growth in these regions being supplied mostly by local vendors, such as Banamex, Digio, PagSeguroand SmartPesa.

For so very long, the central promise of home security services has centered on the idea of central monitoring. You know the drill: when an alarm is triggered, someone in a call center springs into action, calling the house and alternate numbers while also alerting emergency responders like the police if it appears to be a legitimate event.

All this is well and good, but here’s the problem: While central monitoring services are quick to respond (often within seconds), those who are supposed to do something – the police – often don’t get around to the house until long after an intruder is gone. According to the Bureau of Justice, 69% of police responses take longer than 5 minutes, and 45% of responses take longer than 10 minutes.
It’s not like the police aren’t doing their jobs, it’s just that they often have more pressing business, and there’s a good chance they’re wary of the many false alarms that come from home security systems.

All this begs the question: Are we doing home security wrong? Does relying on central monitoring and a police response mean home security services aren’t as effective as they could be?

Quite possibly, and it seems like over the next few years we will give this idea of the central monitoring station as home security lynchpin a rethink.
So what other approach could we take? For one, we could take a cue from Neighborhood Watch programs, where the neighborhood itself organizes and works together to monitor suspicious activity. Data has shown that Neighborhood watch programs work and actually reduce criminal activity.
That’s great, you say, but how could the neighborhood work together to respond in actual invasion events? First off, I don’t suggest vigilante justice; the last thing we need is people taking to the streets with guns. But what I would suggest is possibly using 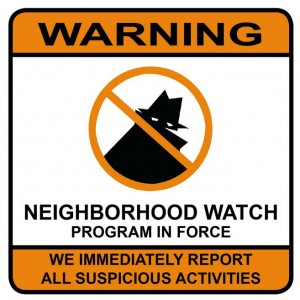 alarm monitoring solutions combined with instant communication to notify others, a “neighborhood security circle” if you will, that would allow a neighborhood to respond by watching at that time for suspicious activity, locking their own doors, and maybe even snapping pictures of bad guys.

Watchful Neighbors and Smart Home Tech: A new security model?
In some ways this is happening already. Some home security offerings let consumers create a list of friends who can be notified in case of an event via text, and often this includes neighbors. But what if we took it a step further, creating “neighborhood networks” of security, where everyone on the street -and their homes -are notified (they can choose to opt out or not participate, of course) of an event immediately and they know what house the alert is coming from. Doors lock. Lights go on. Outside cameras go into full awake mode. All instantly and without a human needing to do it themselves.
It’s worth thinking about. The goal of home security should first be as a deterrent and then as a way to actually catch the bad guys. The reality is, however, catching is difficult as most crooks know to leave quickly before the police arrive, so why don’t we start thinking of ways to deter them that combines the power of neighborhood watch with smart home and IoT technology?

Google appears to possibly be thinking along these lines. A recent patent filing by the security giants includes the concept of neighborhood security networks in it, where homes are be connected via IoT technology. This makes so much sense, I suspect other security and smart home companies are looking at ways to better coordinate neighbors from a security perspective.

While I don’t think we should do away with central monitoring – it’s still a comfort to know there’s someone always there on the phone to call in for help – I think it’s time we start thinking in a new ways and update the home security model to respond more quickly using modern technology and little neighborly help.